I remember one day in college I was sitting next to a kid in a free computer lab working on some stuff before class and he opened up a photograph of an egg that he shot for his “Advanced Commercial Photography” class. He told me that “this is the ultimate test for a photographer, perfectly lighting a white egg against a white background.” This was about a year before I bought my D70s and I thought it was a cool idea and a cool photograph.

Come to find out the kid was:

Lighting an egg is not the ultimate test, but a good exercise in lighting. When photographing an egg you want to eliminate as much shadow as possible but give the egg definition so it doesn’t get washed out in the white.

Here is my Final Image

I did some editing in Lightroom, mostly removing spots but also some basic contrast and white balance. No more editing than I would usually do on a portrait.

I took a lot of steps and did a bunch of experimenting to get to that final photograph. I thought it would make a good blog to walk through it with photos, samples and lighting diagrams so I meticulously documented each step I took.

Note: both strobes are SB600’s synced wirelessly with the Nikon CLS

I grabbed some white paper from a sketch book and let a hot glue gun warm up while I set up my light stands and umbrellas.

I wanted to shoot through my white umbrellas to really diffuse the light as much as possible. Like David mentions in the Strobist blog Rethinking the Umbrella you can move a shoot through umbrella really close to the subject and be able to provide more light. I wanted really diffused light so I had the umbrella shafts extended as far as I could.

I taped my background to the chair, put a harder surface under the spot the egg would sit and put a dollop of hot glue down. I the pressed the bottom of the egg into the dollop and continued to fill in behind the egg with a little more hot glue to ensure it had enough support to stay standing.

Then I got me first setup ready and snapped a photograph. Here’s the lighting diagram, snapshot of the setup and the shot produced. 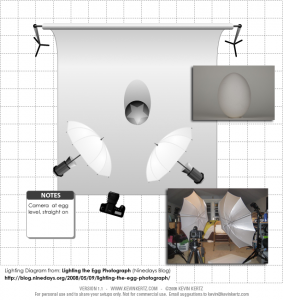 So to eliminate the grossness of seeing the clue, I raised the camera ~ 2ft to shoot down at an angle. 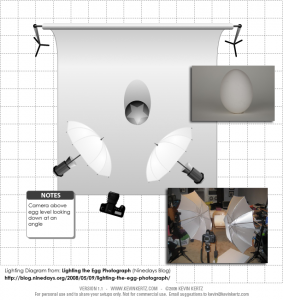 the next step I took was to raise the umbrella on camera right so it would point down at the subject and reduce the hot spot I was seeing on the egg. 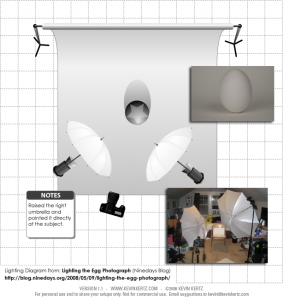 At this point I decided to try with the flashes at 1/8 power to see how that looked and on my LCD it looked super washed out, but now I wish I had used it. Here’s the comparison between the 1/8 and 1/16 powers.

Wish I’d been shooting tethered, then I would have switched to 1/8 power instead of sticking with 1/16 like I did. Well that’s what Lightroom’s for huh 🙁 sad face.

Fourth Setup – Adding in a highlight

Now I was more satisfied with the way the light was coming from above and illuminating the background a bit better but I missed the hot spot or highlight. So I moved the left umbrella in and targeted the umbrella a bit better to point directly at the subject.
I also moved the camera to a more convenient position. 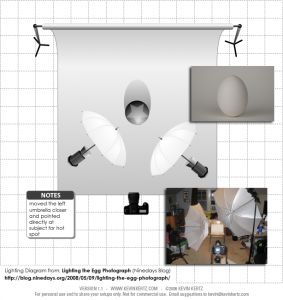 Now I just needed to add a little big to fill to the right side of the egg and a little more light to the background.

I moved the high umbrella at camera right closer and pointed the umbrella between the egg and background to provide more light behind the egg but still lighting the egg since it’s very diffused light that spreads a great distance!

I moved the umbrella at camera left forward a bit, but no closer to the subject, still pointing at the subject.

I added a reflector to the subject’s left (my Styrafoam block) and moved the camera in at a better angle to really eliminate the glue form the bottom. 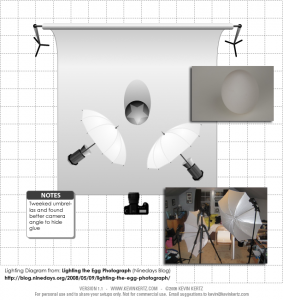 I was pretty happy with my results. Maybe another time I’ll try to light it with just one light and see what I can do with that!

Note I liked the angle I had better for the fourth setup, but I wanted to hide the glue without Photoshop so I settled on the 5th shot’s angle. So word to the wise: be careful with your gluing!

Having your own photo blog is not very complicated. If you want to start your own, we wrote a easy to follow guide on How to Start a Photography Blog. Or if you want to go ahead right now, you can visit GreenGeeks.com and GreenGeeks will give you a %20 discount on your hosting price, as well as a free domain name with your hosting account. Start now.

From technique, setups, equipment and conduct LearnMorePhoto.com helps you take kick photography up a notch and helps you explore ideas you may have never thought of!

By popular demand we are also putting together a great section for models by photographers. Now you have a place to let your new models or subjects learn more about what a photographer wants and needs and expects from their subjects.